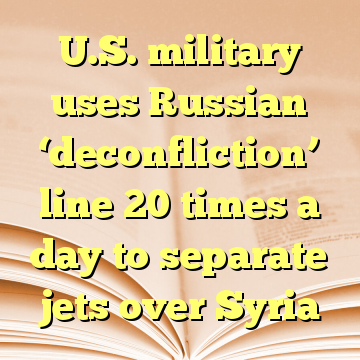 At any given moment, American jet fighters could be carving up the skies within shooting range of Russian MiGs over nearby Syria. The “deconfliction line” exists to make sure things don’t turn ugly.

It’s the most sensitive direct communication link U.S. and Russian officials have to ensure their many aircraft — flying conflicting missions across Syria’s increasingly crowded and chaotic skies — don’t clash in an unintended way.

“We’re on the phone with [the Russians] 15 to 20 times a day just trying to make sure their operation and our operation stay separate,” said Air Force Maj. Gen. David S. Nahom, a top commander of the U.S.-led bombing campaign being run from this strategic base in the Persian Gulf. [ Source: Washington Times (Read More…) ]