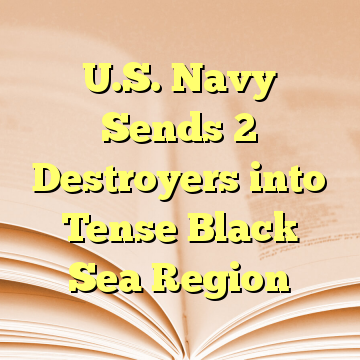 (Worthy News) – Two American destroyers sailed into the Black Sea over the weekend, the first time since 2014 that more than one U.S. warship has operated in this tense region other than in an exercise.

“Our decision to have two ships simultaneously operate in the Black Sea is proactive, not reactive,” said Vice Adm. Christopher Grady, 6th Fleet commander, in a statement Sunday. “We operate at the tempo and timing of our choosing in this strategically important region.”

Russia has viewed U.S. ships transiting these international waters as provocative, ever since Moscow annexed Ukraine’s Crimean Peninsula in 2014.

The U.S. is sending a message that it will defend its allies, uphold maritime laws and protect its offshore interests in Europe and Asia, said Jim Holmes, Naval War College professor of strategy.

“We’re putting Russia on notice in the Black Sea and China on notice in the South China Sea that we will not be deterred from going into those waters, and doing so in force,” Holmes said. [ Source: Military.Com (Read More…) ]