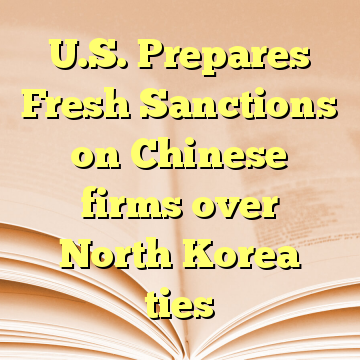 (Worthy News) – Frustrated that China has not done more to rein in North Korea, the Trump administration could impose new sanctions on small Chinese banks and other firms doing business with Pyongyang within weeks, two senior U.S. officials said.

The U.S. measures would initially hit Chinese entities considered “low-hanging fruit,” including smaller financial institutions and “shell” companies linked to North Korea’s nuclear and missile programs, said one of the officials, while declining to name the targets.

The timing and scope of the U.S. action will depend heavily on how China responds to pressure for tougher steps against North Korea when U.S. and Chinese officials meet for a high-level economic dialogue in Washington on Wednesday, the administration sources told Reuters. [ Source ]