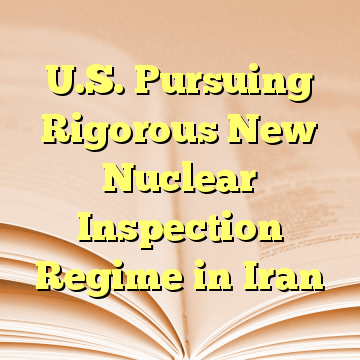 (Worthy News) – The United States is pursuing a rigorous new regime for international inspections of Iran’s nuclear program that includes access to off-limits military sites as well as increased transparency on the Islamic Republic’s often obfuscated enrichment of uranium, the key component in a nuclear bomb, according to U.S. officials and congressional leaders spearheading the new inspection effort.

A delegation of 13 leading senators petitioned the U.S. Mission to the United Nations, led by Ambassador Nikki Haley, to implement a series of stricter inspection methods that would give Western countries a deeper look into Iran’s suspected use of military sites to continue contested nuclear work prohibited under the landmark nuclear agreement, according to U.S. officials who spoke to the Washington Free Beacon.

The Trump administration is said to be fully on board with these tougher inspection measures, which could address lingering questions about Iran’s compliance with the nuclear deal, U.S. officials said. Iran has been found in breach several times since the accord was implemented. [ Source: Washington Free Beacon (Read More…) ]