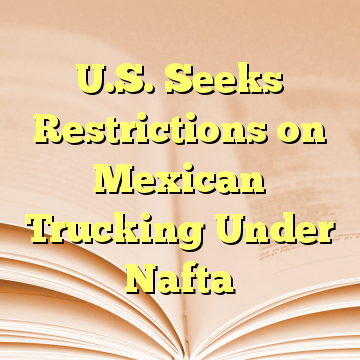 (Worthy News) – The U.S. has proposed another difficult change to the North American Free Trade Agreement that could eventually restrict long-haul Mexican truckers from operating in the country, according to people familiar with the discussions.

American negotiators asked to remove Mexico’s long-haul industry from a Nafta chapter on cross-border services, according to an industry official familiar with the proposal who isn’t authorized to speak publicly. That could open the door to restrictions on truckers, as losing Nafta trade protections and advantages would make it harder for Mexico to challenge any future U.S. requirements on trucks such as new safety checks.

One government official familiar with the text said the U.S. proposal would allow restrictions and limitations on Mexican trucking if certain conditions were reached, while another official described it as a broad industry exclusion that came during the last round of talks in October. Neither was authorized to speak publicly. The U.S. Trade Representative’s office declined to comment, and hasn’t made its proposals public. Reuters also reported last month that the U.S. was seeking fresh restrictions on long-haul trucks from Mexico, citing a person familiar with discussions. [ Source: Bloomberg (Read More…) ]