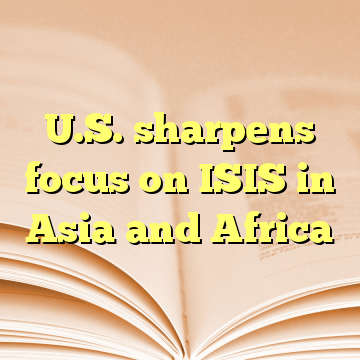 (Worthy News) – U.S. officials expanded their targeting of the Islamic State beyond its Mideast stomping grounds Tuesday by adding three of the groups’ far-flung affiliates — in the Philippines, Bangladesh and West Africa — to the State Department’s “Specially Designated Global Terrorists” list.

The designations, which seize assets the groups may have in U.S. markets and make it a federal crime for American citizens to interact with them in any way, signaled a broadening of Washington’s focus on ISIS affiliates around the world as the group continues to lose its territory in Syria and Iraq.

“These designations target key ISIS-affiliated groups and leaders outside its fallen caliphate,” State Department Coordinator for Counterterrorism Nathan A. Sales said in a statement. “Today’s actions are a critical step in degrading ISIS’s global network and denying its affiliates the resources they need to plan and carry out terrorist attacks.” [ Source: Washington Times (Read More…) ]