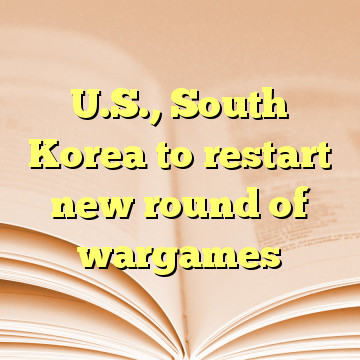 (Worthy News) – Top defense officials in Washington and Seoul plan to restart a new round of massive military drills on the peninsula, initially delayed due to the recent winter Olympic games, within the coming weeks in a move assured to draw a harsh response from North Korea.

Defense Secretary James Mattis, in consultation with Korean Minister of National Defense Song Young-moo, on Tuesday”agreed to resume the annual combined [military] exercises … which were deconflicted with the schedule of the Olympic Games,” according to a Defense Department statement. The exercises, dubbed Foal Eagle and Key Resolve, are scheduled to begin in April, the Pentagon said.

“The United Nations Command has notified the Korean People’s Army on the schedule as well as the defensive nature of the annual exercises,” according to a separate statement issued by U.S. Forces-Korea from the command’s headquarters at Yongsan Garrison in Seoul. [ Source: Washington Times (Read More…) ]