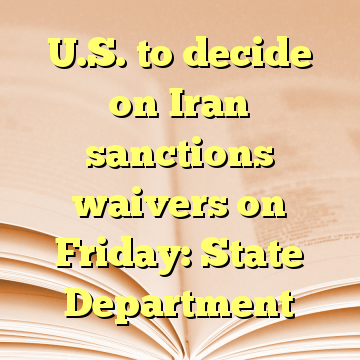 (Worthy News) – The Trump administration is expected to decide on Friday whether to continue to waive U.S. penalties on Iran, as agreed under the 2015 Iran nuclear deal, the State Department said on Tuesday.

U.S. President Donald Trump was expected to meet with Secretary of State Rex Tillerson and Defense Secretary Jim Mattis at the White House later in the week ahead of the decision, State Department spokesman Steve Goldstein told a briefing.

“We would expect a decision on Friday,” Goldstein said. “And there have been ongoing discussions regarding this.”