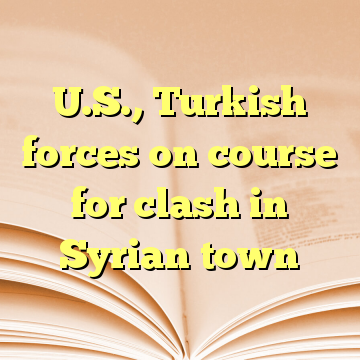 (Worthy News) – The U.S. and Turkish militaries are on a collision course, and the point of impact for the two NATO allies is the Syrian town of Manbij.

Turkish forces say the northern Syrian city, which is ground zero for U.S. operations in support of local Kurdish and Arab forces fighting Islamic State, is a prime objective of their current campaign against Syrian Kurds. The Turks say they will not curtail a Manbij assault because American troops are there, while a top U.S. general said last month that a withdrawal “is not something we are looking into.”

U.S. special operations troops based in Manbij have stayed largely out of Ankara’s way while the Turkish offensive remains focused on the Kurdish stronghold of Afrin, just over 200 miles north of Damascus. [ Source: Washington Times (Read More…) ]