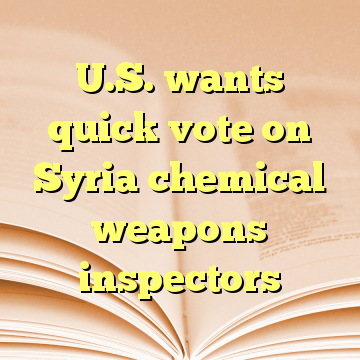 (Worthy News) – U.S. Ambassador Nikki Haley said Wednesday the United States is circulating a resolution that would extend by another year the work of inspectors seeking to determine who is behind chemical weapons attacks in Syria.

Haley told reporters the United States wants a quick vote so the Joint Investigative Mechanism is renewed before its expected report Oct. 26 on responsibility for the April 4 attack on the opposition-held town of Khan Sheikhoun that killed more than 90 people.

She said “there’s overwhelming support” in the Security Council to renew the inspectors’ work for another year. But, she added, “Russia has made it very clear that should the report blame Syria” for the attack “they won’t have faith in the JIM. If the report doesn’t blame the Syrians then they say that they will.” [ Source: Washington Times (Read More…) ]