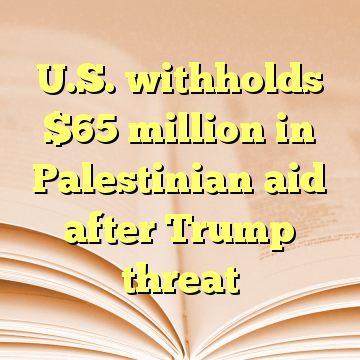 (Worthy News) – The United States on Tuesday said it would withhold about half the initial aid it planned to give a U.N. agency that serves the Palestinians, two weeks after President Donald Trump questioned the value of such funding.

Boxes containing aid from the U.N. Relief and Works Agency (UNRWA) are seen ahead of their transfer to the Gaza Strip, inside the Kerem Shalom border crossing terminal between Israel and Gaza Strip January 16, 2018. REUTERS/Amir Cohen
In announcing that it would provide $60 million to the U.N. Relief and Welfare Agency (UNRWA) while withholding a further $65 million for now, the U.S. State Department said the aid group needed to make unspecified reforms.