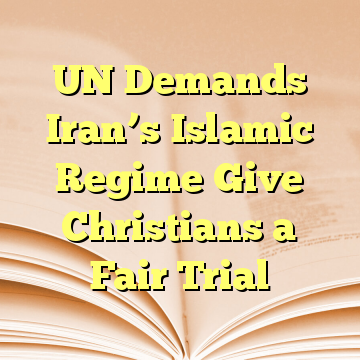 (Worthy News) – Four U.N. human rights experts have issued a joint statement, urging Iran to ensure “a fair and transparent final hearing” at the country’s Revolutionary Court for three Iranian Christians who have been sentenced for “conducting evangelism” and “illegal house church activities,” among other charges.

The U.N. special rapporteurs on the human rights situation in Iran, freedom of religion, minority issues and the right to health have expressed their concerns over last year’s sentencing of Pastor Victor Bet Tamraz, former Assyrian Pentecostal Church leader in Iran, and house church Christians Amin Afshar Naderi and Hadi Asgari, to between 10 and 15 years in prison for various charges.

The Revolutionary Court was due to hold a hearing in the case Sunday but it is not still known if the court ended the case, confirmed the sentences or referred it to the Supreme Court, according to Radio Free Europe. [ Source: Christian Post (Read More…) ]