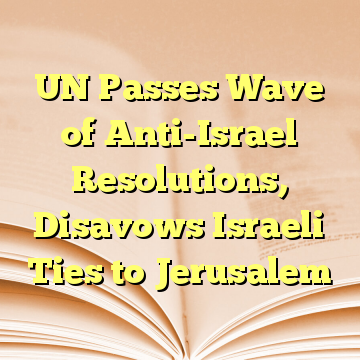 Approved in a 151-6 vote with nine abstentions, the General Assembly resolution stated that “any actions taken by Israel, the occupying Power, to impose its laws, jurisdiction and administration on the Holy City of Jerusalem are illegal and therefore null and void and have no validity whatsoever.”

The resolution was similar to previous Jerusalem-related measures passed in recent years by the UN cultural body UNESCO, which omitted the name “Temple Mount” and only used the Muslim term for the holy site, “Haram al-Sharif.” [ Source: Algemeiner (Read More…) ]