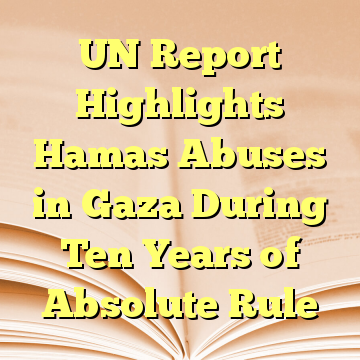 (Worthy News) – A new UN report released on Tuesday highlighted the negative impact of a decade of Hamas rule in Gaza, ending with the grim prediction that living conditions in the coastal enclave will worsen significantly over the next three years.

The report, “Gaza – 1o Years On”, published by UNSCO — the United Nations Special Coordinator for the Middle East Peace Process — examines the progressive deterioration of Gaza’s public services and infrastructure in the decade that has elapsed since the civil war of 2007. After months of internecine fighting, Hamas seized absolute power Gaza in a coup in June of that year, driving out the rival Fatah faction and launching fresh rocket attacks against Israel. Both Israel –which has the longest land border with Gaza — and Egypt imposed a blockade on the territory within months of the coup that remains in place.

“Upon seizing control of Gaza, Hamas has increasingly tightened its grip on power, including by executing, maiming and jailing opponents and suppressing dissent,” the report’s introduction stated. “For years, Hamas was able to sustain its de facto authority and build up its military strength primarily through controlling the movement of goods smuggled through tunnels between Gaza and Egypt and taxing this trade, while the Palestinian Authority paid for essential services to Gaza residents, including some civil service salaries, electricity, water and medical care.” [ Source: Algemeiner ]