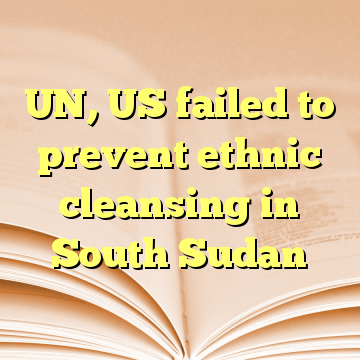 (Worthy News) – Until the summer of 2016, South Sudan’s Yei region was a leafy oasis in the midst of the country’s civil war. But when a national peace deal broke down and government soldiers ransacked the area, a handful of U.N. and U.S. officials begged their leaders for help.

The United Nations must send peacekeepers to Yei to protect civilians from President Salva Kiir’s forces, who are burning villages and slaughtering men, women and children, they argued. And the U.S. needs to change its approach in the face of a potential genocide, they warned.

The pleas of officials and residents fell on deaf ears. The U.N. did not send peacekeeping troops to stay in Yei, and the U.S. continued to support South Sudan’s military, possibly in violation of U.S. law, an AP investigation found. The investigation is based on more than 30 internal or confidential documents from the U.N., White House or State Department, and dozens of interviews with current or former officials and civilians. [ Source: Fox News (Read More…) ]