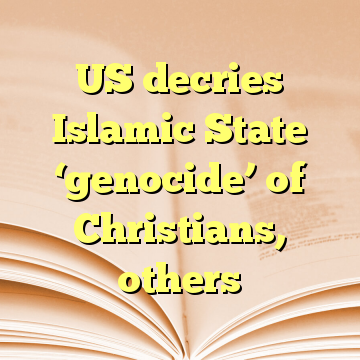 (Worthy News) – The Trump administration denounced the Islamic State terror group on Tuesday for carrying out “genocide” against Christians and other religious minorities in areas under its control.

US Secretary of State Rex Tillerson said the group is “clearly responsible for genocide” against Christians and Yazidis in Iraq and Shiite Muslims in Syria and elsewhere. His comments were made as the State Department released its annual report on international religious freedom.

Tillerson said he was making the pronouncement to “remove any ambiguity” about previous genocide assertions made by his predecessor, John Kerry, who in March 2016, determined that genocide was occurring in Islamic State-held areas but was criticized by lawmakers and religious groups for not declaring genocide was taking place earlier. Neither administration’s genocide determination carries with it any legal obligation for the US or others. [ Source (Read More…) ]