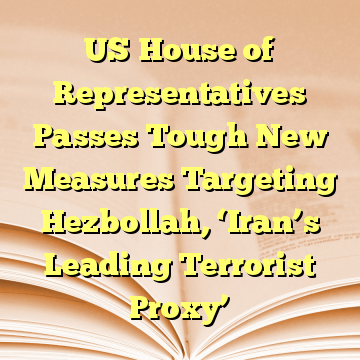 (Worthy News) – The chairman of the House Foreign Affairs Committee declared on Wednesday that the US had sent an unmistakable message to Iran’s Lebanese Shia proxy, Hezbollah, with the passage by the House of Representatives of three new measures targeting the terrorist organization’s financing and recruitment operations.

“Hezbollah is Iran’s leading terrorist proxy, and it is only growing more dangerous,” Rep. Ed Royce (R-CA), said in a statement announcing the new measures, which were introduced with bipartisan support. “It now has an arsenal of more than 100,000 rockets aimed at Israel and has become battle-hardened while propping up the murderous Assad regime (in Syria) alongside the Iranian Revolutionary Guard Corps (IRGC).”

Royce continued: “Hezbollah has taken hundreds of thousands of lives, including Americans. With the House’s action today, we send a strong message that the United States will not allow this threat to go unchecked. These critical measures will impose new sanctions to crack down on Hezbollah’s financing, and hold it accountable for its acts of death and destruction.” [ Source: Algemeiner (Read More…) ]