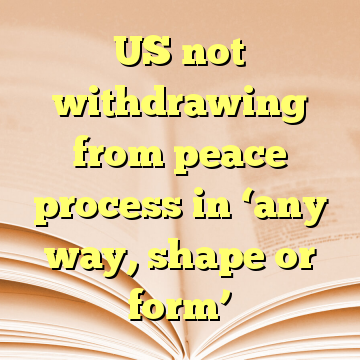 (Worthy News) – The US State Department formally rejected a report from earlier this week that claimed that US President Donald Trump was considering withdrawing from the Israeli-Palestinian peace process due to a series of “tense” meetings between his son-in-law, Jared Kushner, and Palestinian Authority President Mahmoud Abbas.

In a press conference on Tuesday evening, State Department spokesperson Heather Nauert called the report, originally from London-based Arabic daily al-Hayat, “…just false. The President has made Israeli-Palestinian peace one of his top priorities.”

“We understand and recognize that this is not going to be a one-shot deal,” Nauert said of the peace process. “It’s not going to be handled in one meeting or one trip. It is no surprise also that some meetings and conversations may be a little bit more difficult than others. Some will be more challenging. The President has said himself that it is not going to be an easy process, that both sides – the Israelis and the Palestinians – will have to give a bit in order to be able to get to a peaceful arrangement, which we hope to see. But we are not pulling out in any way, shape, or form of this as being one of our priorities.” [ Source ]