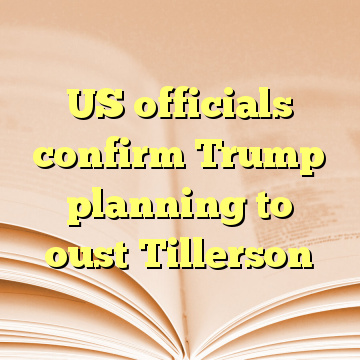 (Worthy News) – After months of clashes on policy and personality, President Donald Trump is considering ousting Secretary of State Rex Tillerson and replacing him with hard-nosed CIA Director Mike Pompeo following less than a year on the job, senior US officials said Thursday as turmoil within Trump’s national security team burst into the open.

The White House plan, which Trump has not yet signed off on, would force a major realignment early in his term, also creating a vacancy atop the CIA that officials said could be filled by Republican Sen. Tom Cotton of Arkansas. The overhaul could produce a significant shift in both the tone and direction of the president’s foreign policy, removing it from the understated former oil man whose style has never fit well with Trump’s.

It is exceedingly rare for a secretary of state, America’s face on the global stage, to be fired or to serve for a year or less. Nor is it common for presidents to have such a significant Cabinet revamp so soon after taking office. Too much churn could fuel the perception of chaos in the Trump White House — perhaps one reason he has yet to pull the trigger. [ Source: Times of Israel (Read More…) ]