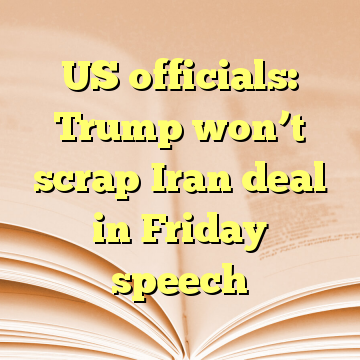 (Worthy News) – US President Donald Trump will unveil a more aggressive strategy to check Iran’s growing power Friday, but will stop short of withdrawing from a landmark nuclear deal, or declaring the powerful Islamic Revolutionary Guard Corps a terrorist organization.

During a White House speech at 12:45 pm (1645 GMT), Trump is expected to declare the landmark 2015 agreement — which curbed Iran’s nuclear program in return for massive sanctions relief — is no longer in the US national interest.

Officials say he will not kill the international accord outright, instead “decertifying” the agreement and leaving US lawmakers to decide its fate. [ Source: Times of Israel (Read More…) ]