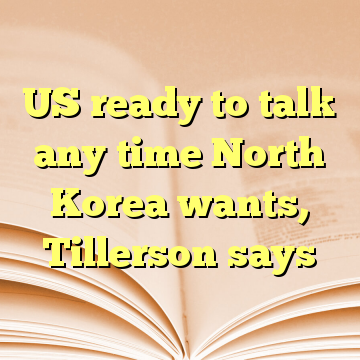 (Worthy News) – Secretary of State Rex Tillerson said Tuesday that the U.S. would be willing to hold talks with North Korea even if the Communist nation does not do away with its nuclear weapons program.

Although Tillerson said the goal of U.S. policy remained denuclearization of the Korean Peninsula, he added it was “not realistic to say we’re only going to talk if you come to the table ready to give up your program. They’ve too much invested in it. The president is very realistic about that as well.”

Tillerson’s remarks at the Atlantic Council think tank in Washington came two weeks after North Korea conducted a test with a missile that could potentially carry a nuclear warhead to the U.S. Eastern Seaboard — a milestone in its decades-long drive to pose an atomic threat to its American adversary that Trump has vowed to prevent, using military force if necessary. [ Source: Fox News (Read More…) ]