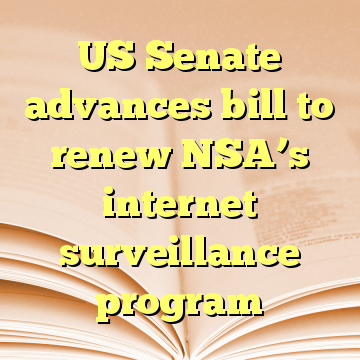 (Worthy News) – The U.S. Senate on Tuesday advanced a bill to renew the National Security Agency’s warrantless internet surveillance program, as a final push by privacy advocates to derail the measure came up short.

The legislation just cleared the procedural 60-vote threshold required to limit debate in the Senate and was expected to earn the simple majority required to officially pass through the chamber sometime later this week. The vote, which split party lines and was held open for nearly an hour and half as opposing sides jockeyed for final votes, was 60-38.

The bill would extend the NSA program, which gathers information from foreigners overseas but incidentally collects an unknown amount of communications belonging to Americans. The bill — which easily passed the House of Representatives last week despite mixed signals posted on Twitter by President Donald Trump — would renew the surveillance program for six years with minimal changes. [ Source: CNBC (Read More…) ]