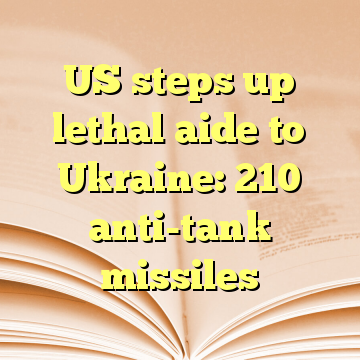 (Worthy News) – The Trump administration told Congress on Thursday that it plans to sell Ukraine 210 anti-tank missiles to help it defend its territory from Russia, in a major escalation of U.S. lethal assistance to Ukraine’s military.

The long-awaited move, which lawmakers of both parties have been urging for years, deepens America’s involvement in the military conflict and may further strain relations with Moscow. It came the same day that Russian President Vladimir Putin announced his country has developed new nuclear weapons he claims can’t be intercepted by an enemy.

The $47 billion sale includes the 210 American-made Javelin missiles along with 37 command launch units. In anticipation of the sale, the United States has already started training Ukraine’s forces on how to use them. The missiles will come from existing U.S. Army stockpiles, probably those that are already stationed in Europe, speeding up the process for transferring them to Ukraine’s military. [ Source: Washington Times (Read More…) ]