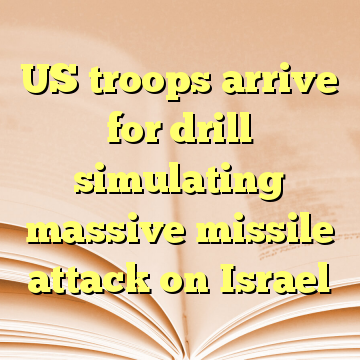 (Worthy News) – US forces are deploying in Israel ahead of a large-scale joint Israel-US military exercise, due to start next week, which will simulate a major conflict in which Israel is attacked with thousands of missiles.

The biennial Juniper Cobra military exercise, which is being held for the ninth time, will take place amid an escalation of rhetoric between Israel and the Hezbollah terrorist group in southern Lebanon, which is believed to have an arsenal of between 100,000 and 150,000 short-, medium- and long-range missiles and a fighting force of some 50,000 soldiers, including reservists.

The Iranian-backed Hezbollah, which seeks Israel’s destruction, has reportedly been threatening to open fire at IDF soldiers if Israel does not halt the construction of a barrier it is building along the Israel-Lebanon border. [ Source: Times of Israel (Read More…) ]