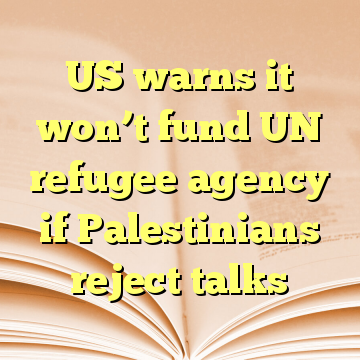 (Worthy News) – The US on Tuesday threatened it would cut aid to the UN’s Palestinian refugee agency if Ramallah refused to come to the negotiating table for relaunched peace talks.

Following US President Donald Trump’s December 6 recognition of Jerusalem as Israel’s capital, Palestinian Authority President Mahmoud Abbas said the US relinquished its traditional role as the mediator of Israeli-Palestinian peace talks. He has also refused to meet with American officials regarding the peace process, including US envoy Jason Greenblatt.

Speaking with reporters Tuesday at UN headquarters, US Ambassador to the UN Nikki Haley stressed the US remains committed to reaching a peace deal, and indicated it would cut off aid if the Palestinians refused to engage in peace negotiations. [ Source: Times of Israel (Read More…) ]