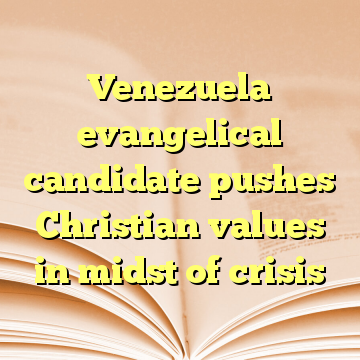 (Worthy News) – A Venezuelan evangelical pastor who is running for president said on Wednesday that religious leaders have earned the right to enter politics in Latin America due to the failure of politicians in the region, where Protestant candidates are on the rise.

Javier Bertucci said in an interview on Wednesday that his promise to restore “values” lost during the OPEC country’s economic crisis would be enough to defeat President Nicolas Maduro in the April 22 vote, which the opposition coalition is boycotting on accusations that the election is rigged.

“If anyone deserves it, it’s us, because we’ve been there for many years, we’ve been there with the poor, with the needy,” said Bertucci, founder of the Maranatha Church in the central state of Carabobo. [ Source: Reuters (Read More…) ]