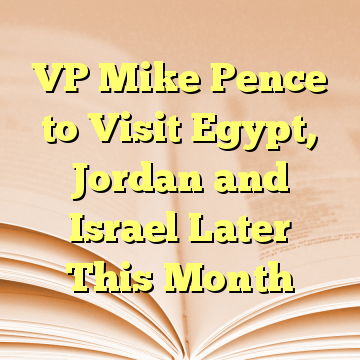 (Worthy News) – In his first trip to the Middle East as vice president, Mike Pence is scheduled to visit several countries and leaders in the region later this month.

After his trip in December was postponed because of a Senate vote on Trump’s tax overhaul, the White House announced Monday that Pence will travel to Egypt, Jordan, and Israel.

The White House said Pence will travel to the region Jan. 19-23, starting with a meeting in Cairo with Egyptian President Abdel-Fattah el-Sissi. Pence will also confer with King Abdullah II of Jordan and then hold two days of meetings and events in Israel. [ Source: CBN News (Read More…) ]