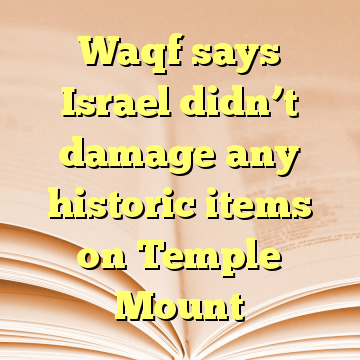 (Worthy News) – The Jerusalem Waqf said on Wednesday that when Israeli security services conducted searches on the Temple Mount in Jerusalem following a shooting attack at the site, they did not damage or steal any historical items.

Israeli police closed down the Temple Mount on July 14 after three Arab Israelis smuggled guns into the compound and used them to shoot two policemen to death.

The shutdown lasted for two days while police investigated the incident. Israel then reopened the site with newly installed metal detectors and cameras — security measures that led to two weeks of protests by Palestinians. The measures were eventually removed. [ Source (Read More…) ]