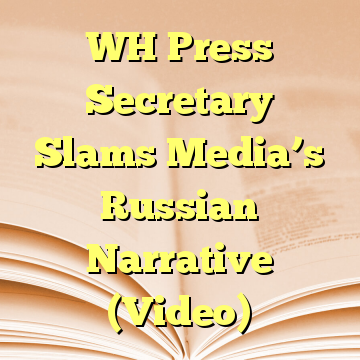 (Worthy News) – White House Press Secretary Sarah Huckabee Sanders slammed the media’s narrative of Russian collusion at a White House Press conference. Earlier in the day, the Washington Post ran an anonymously resourced story meant to harm the Trump presidency, which claimed that President Trump ‘dictated’ Donald Trump, Jr.’s statement regarding a meeting he had with a Russian attorney.

“The statement that was issued [by Don Jr.] was true and there were no inaccuracies in the statement. I think what the bigger question is, everybody wants to try to make this some story about misleading, the thing I see misleading is a year’s worth of stories that have been fueling a false narrative about this Russia collusion and based on a phony scandal based on anonymous sources. And I think that if we’re gonna talk about misleading, that’s the only thing I see misleading in this entire process.

You guys are focused on a meeting that Don Jr. had no consequence, when the Democrats actually colluded with a foreign government like Ukraine, the Democrat-linked firm Fusion GPS actually took money from the Russian government while it created the phony dossier that’s been the basis for all of the Russia scandal.

And If you want to talk further about a relationship with Russia, look no further than the Clintons, as we’ve said time and time again, Bill was paid half-a-million dollars to give a speech to a Russian bank and was personally thanked by Putin for it.

Hillary Clinton allowed one-fifth of America’s uranium to reserve to be sold to a Russian firm whose investors were the Clinton Foundation donors. And the Clinton campaign chairman’s [John Podesta’s] brother lobbied against sanctions on Russia’s largest bank and failed to report it.
If you guys want to talk about having relations which you seem obsessed with doing, look no further than there.”