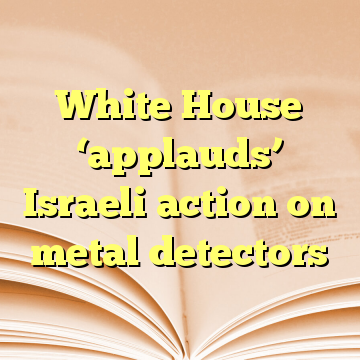 (Worthy News) – The Trump administration on Tuesday night welcomed Israel’s decision to remove metal detectors from entrances to the Temple Mount, after introduction of the new security measure led to violence regionwide.

The Israeli government chose to remove the newly installed metal detectors at Haram al-Sharif– one of the holiest sites in Islam– “despite the demonstrated need to enhance security,” Press Secretary Sarah Huckabee Sanders said in a statement, “in the wake of the murder of two Israeli police officers at the site on July 14.”

“The United States applauds the efforts of Israel to maintain security while reducing tensions in the region,” Sanders continued. [ Source:Jerusalem Post (Read More…) ]