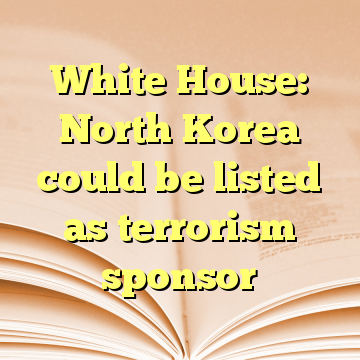 (Worthy News) – US President Donald Trump’s national security adviser says North Korea could be returned to the list of countries the US believes sponsor terrorism, as part of Trump’s strategy to counter the North’s growing nuclear threat.

“You’ll hear more about that soon, I think,” the adviser, H.R. McMaster, said at a briefing on the eve of Trump’s five-nation tour of Asia, which starts Friday. North Korea’s nuclear and missile weapons threat will be a key focus of Trump’s meetings with the leaders of Japan, South Korea, China, Vietnam and the Philippines during the 12-day trip, the president’s first official visit to the region.

McMaster cited the killing in a Malaysian airport earlier this year of the estranged half-brother of North Korea’s leader as an act of terrorism that could lead to the North’s being added back to a list that currently includes only Iran, Sudan and Syria. [ Source: Times of Israel (Read More…) ]