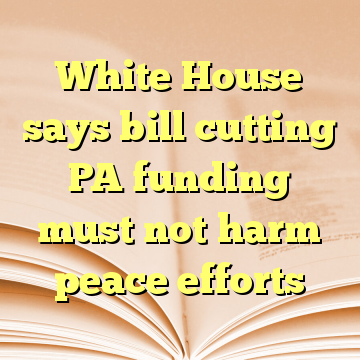 (Worthy News) – The White House offered some support for a bill that would slash Palestinian Authority funding over terrorist salaries Monday, but said the administration would work with Congress to ensure the legislation does not interfere with attempts to broker an Israeli-Palestinian peace deal.

On Thursday, the Senate Foreign Relations Committee passed the Taylor Force Act after marking up the bill to guarantee funding for security cooperation with Israel and humanitarian aid would not be touched, attempting to calm worries that the effort could harm ties with Ramallah.

“President Trump has made it clear that he believes the Palestinian program that provides financial support to Palestinians convicted of acts of terror or their families incentivizes terrorism and must end,” a White House official told The Times of Israel on Monday, and that “American taxpayer dollars should not be used in a way that even indirectly supports terror.” [ Source (Read More…) ]