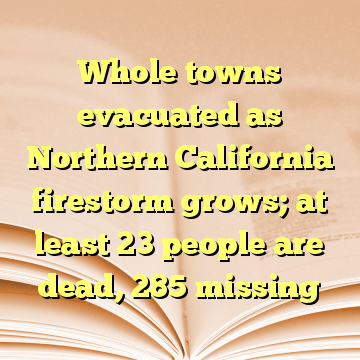 (Worthy News) – The death toll rose to 23 on Wednesday night from the rapidly spreading firestorm in California wine country as firefighters were battling the return of dangerous winds that sparked new evacuations.

All residents of Calistoga and Geyserville were ordered to leave their homes as firefighters braced for a tough fight overnight on numerous fronts of the fires. About 8:20 p.m., mandatory evacuations were also issued for parts of eastern Sonoma Valley, including Castle Road and 7th Street East north of Lovall Valley Road.

My sister is in Disneyland and just sent me these pictures from the fire. Is the world ending or something? Cause this is wack http://pic.twitter.com/uRut0up3Yr