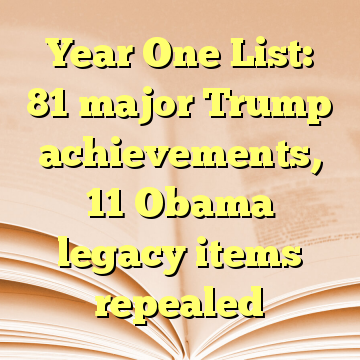 (Worthy News) – With the passage of the GOP tax bill this week, the Trump administration has scored 81 major achievements in its first year, making good on campaign promises to provide significant tax cuts, boost U.S. energy production, and restore respect to the United States, according to the White House.

And along the way, President Trump even outdid his own expectations and slashed at least 11 major legacy items of former President Barack Obama, including cracking down on the open border, slowing recognition of communist Cuba and effectively killing Obamacare by ending the mandate that everyone have health insurance or face a tax.

According to the White House, the 81 accomplishments are in 12 major categories and include well over 100 other minor achievements. [ Source: Washington Examiner (Read More…) ]