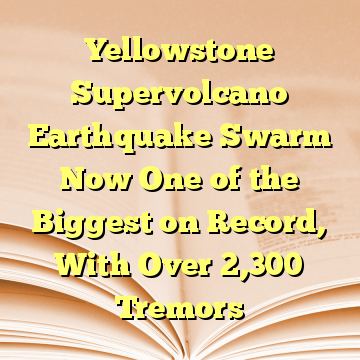 (Worthy News) – An ongoing earthquake swarm at Yellowstone volcano is now one of the biggest ever recorded, with over 2,300 tremors since it began in June.

As of August 30, 2,357 earthquakes had been recorded. The most powerful in recent weeks was magnitude 3.3; it took place on August 21.

The most powerful in the current swarm was a magnitude 4.4, which was recorded on June 15. Most of the earthquakes were in the magnitude 0 or 1 range, with a further 181 recorded at magnitude 2 and 11 at magnitude 3. Another 53 were less than 0, meaning they were very small events that could be detected only with sensitive earthquake-monitoring instruments. [ Source (Read More…) ]