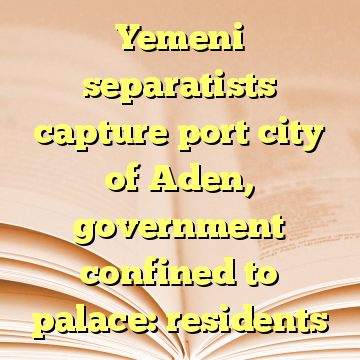 Fighting between southern separatists, backed by the United Arab Emirates (UAE), against forces loyal to Saudi-based president Hadi, risk crippling their once united campaign against the Iran-aligned Houthi movement in Yemen’s north.

The UAE is a major component of a Saudi-led military coalition of Arab states that has supported Hadi’s government since the Houthis seized much of the country, including the capital Sanaa, three years ago. Hadi’s government operates out of Aden, while he lives in Saudi Arabia. [ Source: Globe and Mail(Read More…) ]