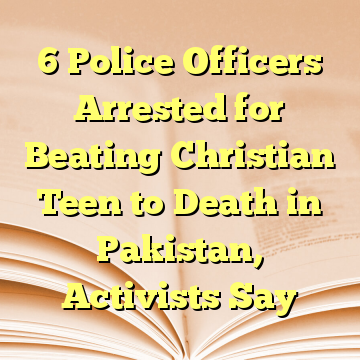 (Worthy News) – Six police officers in Pakistan have been arrested and charged with murder after they allegedly beat to death a Pakistani Christian teenager earlier this month, according to human rights advocates.

The London-based charity British Pakistani Christian Association reported that the six officers accused of killing 17-year-old Arslan Masih in the town of Sheikhupura in the Punjab province of Pakistan have been charged under sections 148, 149 and 302 of the Pakistani penal code.

Masih, who was a student at Ideal Science Academy, reportedly got into a fight with a Muslim bully when the bully pressured him to convert to Islam. According to BPCA, Masih won the fight. However, the Muslim bully’s uncle was a local police officer. [ Source: Christian Post (Read More…) ]