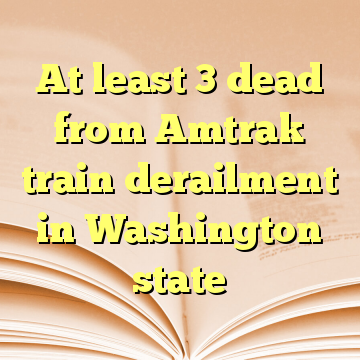 (Worthy News) – At least three people died and dozens were injured after an Amtrak train on the inaugural run of a new route derailed in Washington state this morning, with part of the train careening off an overpass onto a heavily-trafficked highway below, a local official said.

None of the deaths were among those who were on the roadway of Interstate 5 when the train cars fell, according to the Pierce County Sheriff’s Office. Several motorists on the highway near Dupont, about 20 miles south of Tacoma, were injured when their vehicles were struck by the derailed train.

The crash left train cars scattered in the surrounding woods and dangling off the overpass, and passengers “catapulted” into the seats in front of them, according to a survivor. All but one of the train’s 14 cars jumped the tracks, said Washington State Police spokeswoman Trooper Brooke Bova. Five cars and two semis on the interstate were impacted by the crash, Bova said. [ Source: ABC News (Read More…) ]