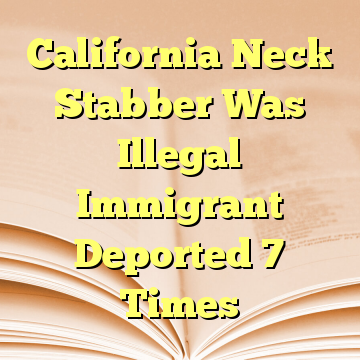 The suspect, Eulalio Miniz Orozco, allegedly was captured on surveillance cameras on Dec. 21 getting up from his table while eating and brutally stabbing a fellow diner in the neck at Lola’s Supermarket in the Santa Rosa area. Orozco was arrested by local authorities Dec 28.

Orozco is also known as Ricardo Velasquez-Romero, according to ICE. ICE placed a detainer on Velasquez on Dec 28 “in connection to a stabbing that occurred in Santa Rosa, Calif,” ICE spokesman James Schwab told TheDC. [ Source: Daily Caller (Read More…) ]