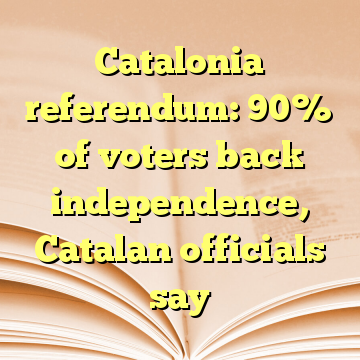 Catalonia’s government said that of the 2.2m voters who were able to cast ballots in the banned referendum, two million voted for independence.

Regional president Carles Puigdemont said Catalonia had “won the right to become an independent state”, adding he would keep to his vow to declare independence unilaterally if separatists win more than 50% of the vote.

However, Spanish PM Mariano Rajoy insisted that no independence referendum had occurred and that those who took part had been “fooled” into participating in a vote declared illegal by the country’s constitutional court. [ Source:Sky News (Read More…) ]

Catalans Signal They May Declare Independence Within a Week

Catalan separatist leaders signaled they may be moving toward a unilateral declaration of independence as early as this week after hundreds of activists were injured on Sunday as they sought to stop Spanish police from shutting down an illegal referendum.

Catalan President Carles Puigdemont appealed to the European Union for support as he pledged to inform the regional parliament of the result of the vote in the coming days. The assembly will then act in line with the referendum law, Puigdemont said — and that could lead to a unilateral declaration of independence within 48 hours of the notification. [ Source: Bloomberg (Read More…) ]