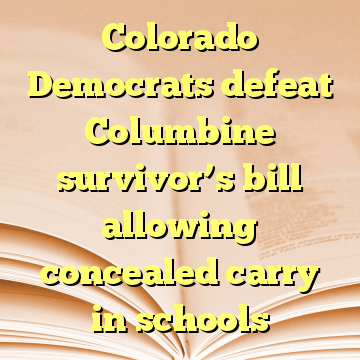 (Worthy News) – Colorado Democrats defeated a bill Wednesday to remove restrictions on concealed-carry in K-12 public schools, a measure introduced by a Columbine survivor aimed at providing another line of defense against mass shootings.

Democrats, who control the state House, rejected the bill on a 6-3 party-line vote after six hours of testimony before the House State, Veterans, and Military Affairs Committee.

The Colorado bill would have allowed concealed-carry permit holders to bring their weapons onto school property, instead of being required to leave them in their locked vehicles.