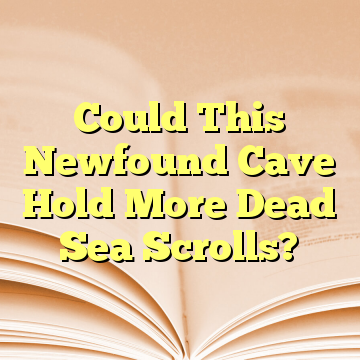 (Worthy News) – Archaeologists are excavating a newfound cave in Qumran, with the hope of finding new Dead Sea Scrolls.

The Dead Sea Scrolls were discovered in 12 caves and date back around 2,000 years and consist of thousands of fragments from more than 900 manuscripts, including numerous copies of texts from the Hebrew Bible. The scrolls were written in Hebrew, Aramaic and Greek, but who, exactly, wrote them is a matter of debate among scholars. Many experts believe that members of a Jewish sect called the Essenes wrote the scrolls at Qumran. Eleven of the Dead Sea Scroll caves were discovered between 1947 and 1956 near the newfound cave, in what is now the West Bank, near the shore of the Dead Sea.

In 2017, archaeologists announced the discovery of a 12th cave, though they said the cave had been looted in the mid-20th century. Inside the cave, they discovered only one blank scroll, along with the remains of jars, cloth and a leather strap that would have been used to wrap and store the scrolls, according to the team, led by Oren Gutfeld, an archaeologist with the Hebrew University of Jerusalem’s Institute of Archaeology. [ Source: Live Science (Read More…) ]