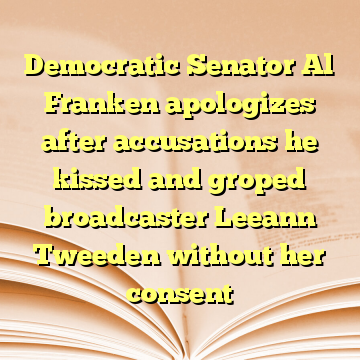 (Worthy News) – Sen. Al Franken apologized to the TV host and sportscaster who accused the Minnesota Democrat of kissing and groping her without her consent – and promised to cooperate with any investigation into the 2006 incident.

“I am asking that an ethics investigation be undertaken, and I will gladly cooperate,” Franken said in a statement Thursday.

Hours earlier, Leeann Tweeden wrote an online post describing how Franken, while they were on a USO tour in the Middle East to entertain U.S. troops, “put his hand on the back of my head, mashed his lips against mine and aggressively stuck his tongue in my mouth.” [ Source: USA Today (Read More…) ]