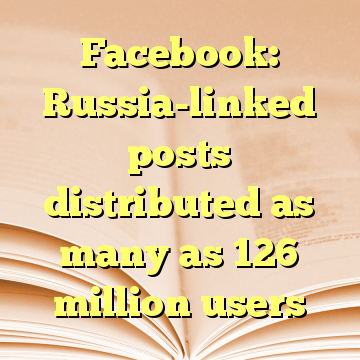 (Worthy News) – Facebook says a Russian group posted more than 80,000 times on its service during and after the 2016 election, potentially reaching as many as 126 million users.

The company plans to disclose these numbers to the Senate Judiciary Committee on Tuesday, according to a person familiar with the testimony. The person declined to be named because the committee has not officially released the testimony. Facebook, Twitter and Google will testify at three hearings Tuesday and Wednesday.

Colin Stretch, Facebook’s general counsel, plans to tell the Judiciary panel that 120 pages set up by Russia’s Internet Research Agency posted the material between January 2015 and August 2017. The company estimates that roughly 29 million people were directly “served” these items in their news feeds from the agency over that time period. [ Source: Washington Times (Read More…) ]