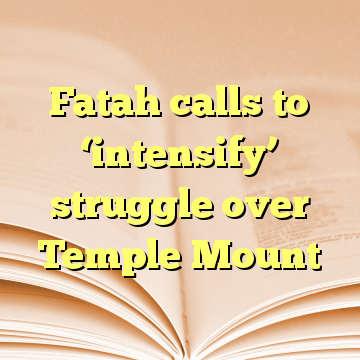 (Worthy News) – Palestinian Authority President Mahmoud Abbas’s Fatah faction has called to “intensify the popular struggle” over the Temple Mount, despite the removal of metal detectors and security cameras from the holy site after a week of protests over the increased security measures.

Muslim worshipers have stayed away from the sacred Jerusalem compound since Israel installed metal detectors there last week, in the wake of a July 14 terror attack carried out with guns that had been smuggled onto the Mount. Instead, they have performed mass prayer protests outside the shrine, some of which devolved into clashes with Israeli security forces.

In its Wednesday decision, the Fatah Central Committee said that it would continue protests over the security measures and called for this week’s Friday prayers to again take place outside of the compound. Last Friday saw violent protests in several Jerusalem locations at the end of prayers. [ Source:Times of Israel (Read More…) ]