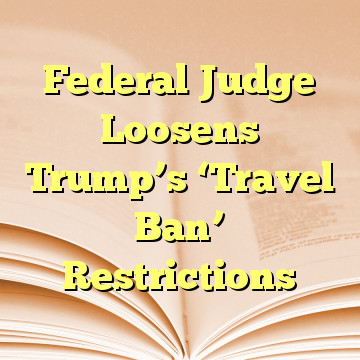 (Worthy News) – A federal judge in Hawaii on Thursday ruled that the U.S. government cannot apply a key part of President Donald Trump’s so-called “travel ban” to bar entry of grandparents and some other relatives of people legally in the country.

U.S. District Court Judge Derrick Watson wrote in a ruling that the government’s interpretation of those qualifying for an exemption to the travel restrictions is overly broad.

“The Government’s definition represents the antithesis of common sense,” Watson said in his ruling. “Common sense, for instance, dictates that close family members be defined to include grandparents.” [ Source ]