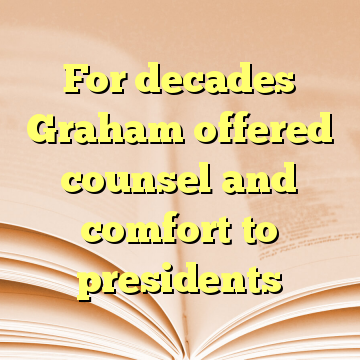 (Worthy News) – He was rebuffed, then embraced, by Harry Truman. Confided in — and deeply hurt by — Richard Nixon. A source of reassurance for George H.W. Bush on the eve of war. The spark that finally turned George W. Bush toward sobriety.

The Rev. Billy Graham, who died Wednesday at age 99, was a fixture of the presidency to every man who has held the office back to the early years of the Cold War. He met all 12 of them, plus Donald Trump before he ran for office, and counseled most as they grappled with governing, politics and peace of mind.

Though most presidents have sought guidance from spiritual leaders, Graham’s role at the top echelons of American politics was unique, and there’s no obvious successor likely to fill his shoes as an adviser to leaders from both parties. The evangelical movement he helped turn into a political force is now most closely aligned with the Republican Party, including Trump, who has been publicly backed by numerous evangelical leaders. [ Source: Fox News (Read More…) ]