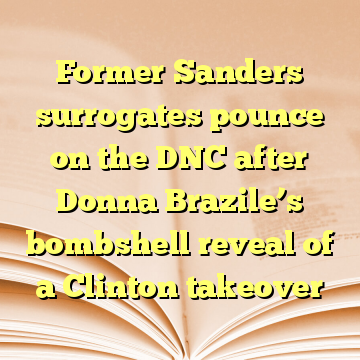 (Worthy News) – Former surrogates of Sen. Bernie Sanders, I-Vt., from the 2016 campaign are fuming about the Democratic National Committee in response to Donna Brazile’s disclosure of “proof” that the Hillary Clinton campaign took over the DNC’s finances and operations in an effort to tip the scales in Clinton’s favor for the party’s presidential nomination in 2016.

With many noting they have been crying foul since the primary, multiple liberal figures in the Democratic Party took the opportunity issue a fresh cadre of demands to change the DNC, which earlier this year picked an Establishment-favorite, Tom Perez, to lead over the liberals’ preferred candidate, Rep. Keith Ellison.

“Today we heard from Donna Brazile that what many suspected for a long time, is actually true: the DNC secretly chose their nominee over a year before the primary elections even occurred, turning over DNC control to the Clinton campaign,” said Rep. Tulsi Gabbard, D-Hawaii, a former DNC vice chairman. Gabbard, declared the 2016 primary “rigged,” resigned from the DNC in February 2016 in order to endorse Sanders. [ Source: Washington Examiner (Read More…) ]