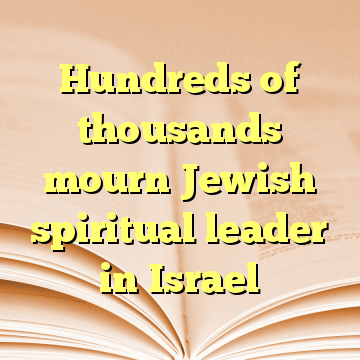 (Worthy News) – Hundreds of thousands attended funeral ceremonies in Israel Tuesday for a spiritual leader of ultra-Orthodox Jews after his death aged 104, with a sea of black-hatted mourners thronging his neighbourhood.

Rabbi Aaron Yehuda Leib Shteinman was considered the leading spiritual authority for ultra-Orthodox Judaism, and his death led to an outpouring of grief among his followers.

Police estimated the crowd to number in the hundreds of thousands. [ Source: Yahoo (Read More…) ]