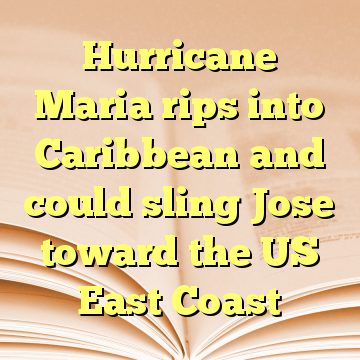 (Worthy News) – Hurricane Maria made landfall Monday evening as an “extremely dangerous” Category 5 storm on the island of Dominica and is expected wreak devastation across the Caribbean over the next couple of days before making a turn north when it could dance around a meandering Hurricane Jose and send that storm flying toward the East Coast.

Only two weeks ago the Caribbean braced for Irma, a record-breaking Category 5 hurricane which wracked many of the same islands in Maria’s path.

Maria is not expected to weaken much over the next couple days, as the NHC notes warm waters and low wind shear make favorable atmospheric and oceanic conditions for the hurricane. “Maria is expected to remain a Category 4 or 5 hurricane when it approaches the Virgin Islands and Puerto Rico, however some fluctuations in intensity are possible due during the next 24 to 36 [hours] due to eyewall cycles,” said the NHC advisory.

Also a possibility is what meteorologists call the “Fujiwara Effect,” in which Maria and Jose could perform a sort-of dance around each other, resulting in a diminished Jose getting slung westward toward the East Coast while Maria heads north out into the Atlantic Ocean. [ Source (Read More…) ]